Alabama Communications and Operations Portal, the unique information system for law enforcement information within Alabama. AlaCOP is the umbrella system for a host of information and security systems, including the Active Directory Authentication and Processing Tool (ADAPT), and the Law Enforcement Tactical System (LETS). These systems provide access for all law enforcement officers in Alabama to common information needed to conduct police business, and provide secure logon and user administration on a statewide basis – for all police agencies in the state. This work is in support of the Alabama Criminal Justice Information Center, which is a state leader for the promulgation of police technology along with the close collaboration of CAPS.

In the summer of 2006, the Alabama Criminal Justice Information Center (ACJIC) unveiled the Alabama Communications and Operations Portal (AlaCOP), the state’s official criminal justice information web portal for authorized law enforcement and criminal justice officers within Alabama. AlaCOP was developed by CAPS under a contract funded by a FY 2004 grant provided by the Alabama Department of Homeland Security, through the United States Department of Homeland Security. Security and authentication within AlaCOP is provided by the Active Directory Authentication and Processing Tool (ADAPT). All users must be authenticated by ADAPT to determine their privileges and the access that they may have to the various AlaCOP functions. ADAPT uses a specialized database called the Centralized Agency Management System (CAMS), which keeps track of the privileges of every AlaCOP user. Developed by the CAPS system development team, ADAPT and CAMS are unique in their ability to maintain both authentication security and user privileges.

As shown in the illustration above, the AlaCOP.gov portal enables officers to view state law enforcement announcements, such as Amber Alerts, felony fugitives, missing persons, training announcements, state law enforcement news, homeland security news, plus a wide variety of relevant documents and links. The officers may also select options to design and personalize their AlaCOP home page so that it is customized to exactly what they want to see and where they want to see it (e.g., the page may be modified to be two columns rather than three, and several of the panels are optional).

AlaCOP also provides law enforcement access to the Law Enforcement Tactical System (LETS), which was first developed by CAPS as a stand-alone system and announced in June, 2002. This innovative product revolutionized the way that information is shared among the state’s criminal justice agencies. LETS pulls together millions of records, titles, registrations and even photographs to assist the state’s law enforcement officers and agencies. State agencies integrating information into LETS include ACJIC, the Alabama Administrative Office of Courts, the Alabama Department of Corrections, the Alabama Board of Pardons and Paroles, and the Alabama Department of Public Safety.

The display below demonstrates the LETS output generated by a blanket name search. 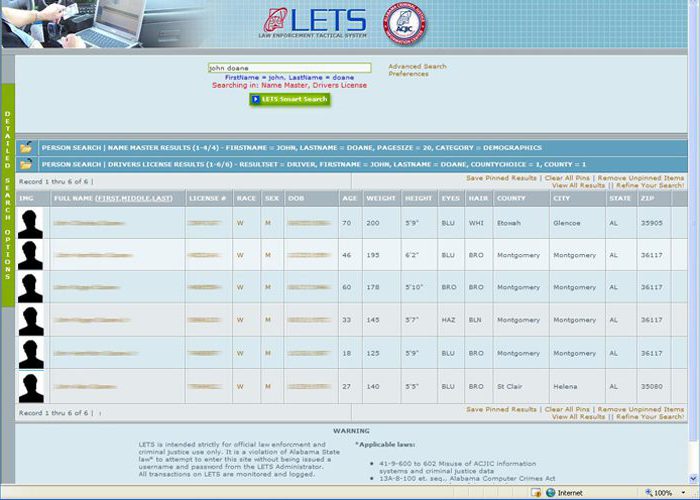 Once the individual of interest is identified, a follow up query can provide details on all items in the accessed databases for the individual selected, as shown below. 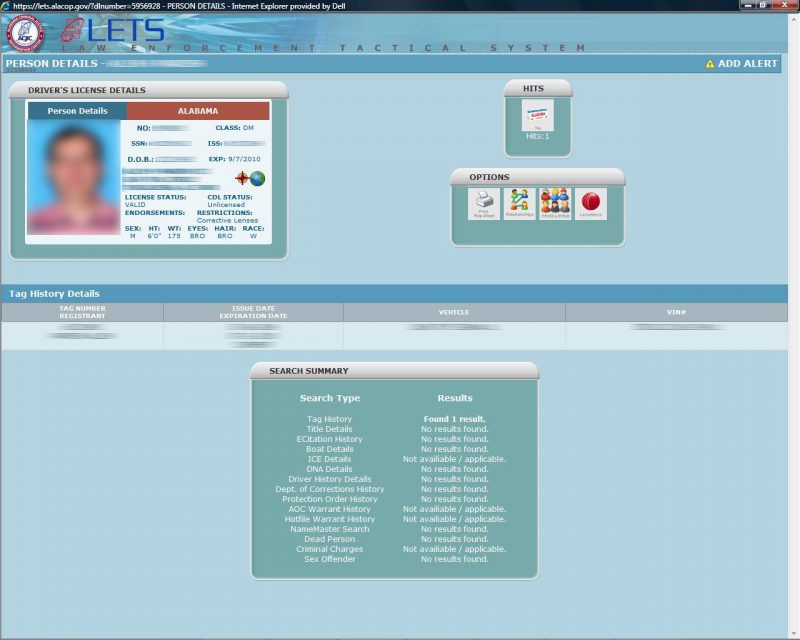 Through the AlaCOP portal, LETS provides officers with person- and vehicle-based search that surveys state court and other databases, (such as the state’s sex offender registry). One unique feature is its ability to set alerts so that law enforcement officers can be updated if there are any changes in the data on particular suspects.

AlaCOP users have access to two message systems. The first is a standard e-mail address that is supported within AlaCOP. The second is a secure “Message Center” for officers to communicate with each other separate from the vulnerabilities of e-mail. The Message Center feature includes the officer’s ability to create closed groups (such as investigators working on a particular case) and open groups for information sharing on more general events, such as the recent Alabama church arsons. Only the moderator can add someone to a closed group, but anyone who wants to can join an open group. Any member of AlaCOP can become a moderator and set up a group.

LETS data sources are transformed into Web services and are searchable by any officer accessing the secure portal. ACJIC information systems process more than 15 million transactions per month, and they are accessed by more than 15,000 sworn officers in over 900 criminal justice entities within Alabama and across our nation. ACJIC is connected nationally to the FBI’s National Crime Information Center, as well as to all 50 states via the National Law Enforcement Telecommunication System (Nlets). The ACJIC 24-hour Command Center monitors the network and all of their systems, and a toll free hotline ensures that officers will always be able to reach the help desk staff.