The Secure Homeland Access and Reporting Environment (SHARE) is a web portal developed to establish the critical missing link between State/Federal homeland security officials and field officers (Field officers are defined within this context to be all federal, state, local agency and private sector security officers who may be in situations where they might observe terrorist activity). The state’s Fusion Center is a group of analysts that have been established within the Alabama Department of Public Safety who are responsible for awareness and prevention of not only terrorist activities, but also all major related criminal activities. Once major crimes or terrorist activities are in process, the Fusion Center takes on the responsibilities of assisting in response, protection and recovery.

SHARE was developed with support of the US Department of Homeland Security (USDHS) for the Information Technology Evaluation Program (ITEP). It was one of only 12 nationally funded proposals and served as a prototype for all subsequent Suspicious Activity Reporting (SAR) systems.

While SHARE is strictly for interactions between law enforcement and the state’s Fusion Center, a companion portal, Portal to Uphold a Secure Homeland (PUSH), was also developed under this project to support private sector security personnel who oversee critical infrastructure.

Below, note the four major tabs of the home page: 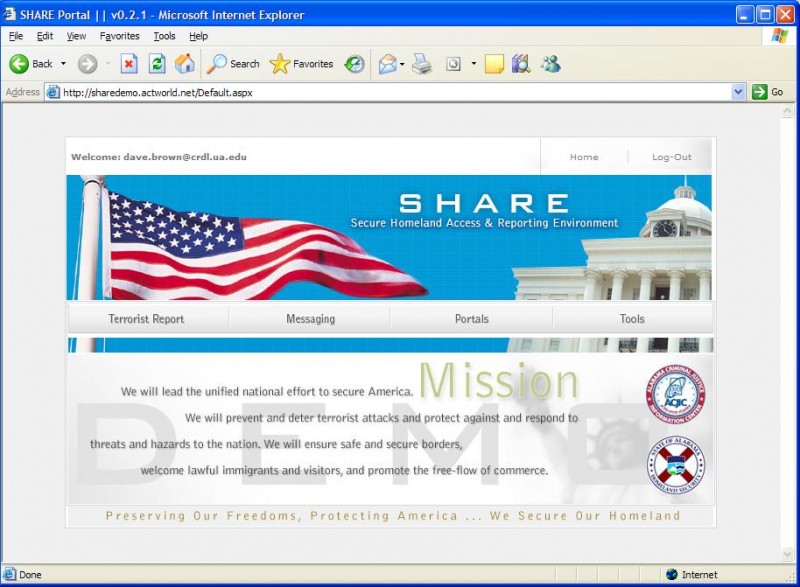 When a SAR comes in from the field SHARE will detect it and automatically generate a message to those Fusion Center members who are on call. Thus, no time elapses from the submission of the SAR until it is acted upon. The SAR itself goes into a case management system, the main screen of which is given below.

Notice that the new SAR is in a separate area at the top of the list. It will remain there until it is activated by a supervisor, which will include the assignment of the SAR to a Fusion Center investigator. A log is kept of all SAR case updates, and thus analysts can modify and update the SAR without fear of losing any information. All Fusion Center personnel have access to all SARS. The “Status” and Assigned” fields can only be modified by a Fusion Center supervisor.