The Strategic Highway Safety Plan (SHSP) effort was mandated by the US Department of Transportation to assure that every state had a comprehensive (i.e., statewide) plan for those traffic safety efforts that were being supported with federal funds. It involved all of the major agencies within the state that support traffic safety, and many of their plans (e.g., the ADECA HSP) were incorporated into the SHSP as appendices. The coordination of this effort was led by the University Transportation Center of Alabama (UTCA), and CAPS provided heavy technical assistance to the participants in satisfying whatever data needs they had through the use of our CARE software.

One of the most interesting CARE-supported efforts is given in the example display below. An output comparable to this was generated each year, but the change in the relative positions of the categories was not significant from year to year. The table is arranged with the highest number of fatal crashes (persons killed in the case of restraints) at the top – see the first numeric column. This provides a first cut view of the potential lives that could be saved by taking countermeasure actions within each of these areas. 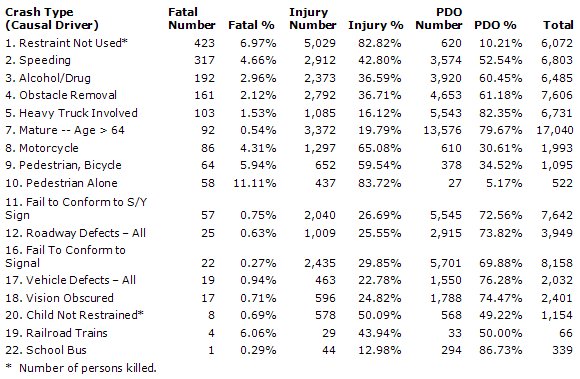 This table provided initial guidance to those developing the SHSP. It was just one of the many CARE outputs that assisted the SHSP task force. It might be noted that a filter for each of these categories was necessary since most of them require the evaluation of several data elements in order to determine if the crash qualifies.

This table cannot be used without considerable discretion. For one thing, the categories are not mutually exclusive. In other words, considering the first few categories as an example, it would be possible to have a crash in which no restraints were used, the causal driver was speeding and under the influence of both alcohol and drugs, ran into a truck, and was a mature driver. So you cannot just add the numbers in the first column and obtain the number of fatal crashes in the year. Fatal crashes that involve more than one crash type are problematic in resolving just which of the crash types was at fault or most at fault in causing the fatality.

On the other hand, the issues at the top of the table are two orders of magnitude larger than some of those at the bottom of the table. Inaccuracies as described above might be of significance when two items with very similar crash numbers are being compared. However, it should be clear that all other things being equal, putting considerable resources into those items near the bottom of the table at the cost of those at the top will result in a higher fatality count within Alabama.

The above is a “big picture” table. It is not meant to reflect negatively on any traffic safety effort. Many of these efforts, especially those involving dedicated advocates, are of very low cost and highly targeted to a particular vulnerable subset of the population. For example, one reason that “Child not Restrained” is near the bottom of the list is because of the continuing efforts of law enforcement and child advocates to assure that children are not only restrained but restrained properly.

The SHSP took into account the fact that any plan that recommends countermeasures must consider four essential items:

In a sense every countermeasure has a downside in that it is consuming resources that conceivably could go to another more cost-effective countermeasure. Sound planning takes into account not only these tradeoffs, but the fact that tight restrictions are placed on most traffic safety funds that prevents them from being spent on anything except what that particular program allows. Thus, optimization must be performed within each of these budget “pots,” if the Federal government does not allow transfers among them (which is typically the case).

CAPS will continue to support not only the SHSP effort, but any traffic safety effort in the state that can use CARE information to improve its ability to save lives and reduce injury. On average, CAPS receives about a dozen or so such data requests per month, which are handled by our CARE traffic safety specialists in as expedient a manner as possible.